Author’s Note– I am sorry for such a delay in updating this story, but real life is a very powerful de-motivator when it comes to inspiration on an epic scale as this story. You have my apologies. To compensate, I have a little longer chapter and some couple moments for my readers.

Disclaimer- Nagin 5 is not mine, I only own this story. (Refer Chapter 1 for full disclaimer.)

The next morning, in Vani’s bedroom, Veer, Bani, Tapish and Meera are discussing about what they learnt in the Naag temple the day before.

Tapish- “So the only way to stop mothe(was about to say mother)..…I mean Markaat is to ki….kil…kill her by this dagger is it? There is no other option?”

Bani comes and puts a hand on Tapish’s shoulder. “Tapish bhai, Veeranshu I understand that how much difficult it is to even talk about this. Since the time she has been freed—and that also due to my own actions—she has continuously tried to harm not only me but our whole family as well. She was the one who had captured my family when they were out and trapped you all in your own home and created those spikes within the house. But even though all that she is and all that she has done, does not change the fact that she is your mother and it is disheartening that you should even have to think about killing her.”

Veer- “Bani first of all, it is not your fault in releasing her. You didn’t know about her truth and you just thought you were helping an innocent victim. We all thought dad was at fault then.”

He paused as he realized that he had fought with his dad because of this, was even so close to raising a hand on him, the one who had raised him with so much love when his mother had disappeared when he was just a child. Oh God…what had he done. He returned to the present from his thoughts when he felt the hand of his beautiful wife gently rubbing his back, showing him she was him through her silent support.

“It has taken me a long time to separate Maa and Markaat in my head and bhai, I’ll suggest you to the do the same. Chandrakala Singhania is my mother. She was loving, nurturing and a beautiful woman and she disappeared when we were children. She is dead now. Markaat is…. Markaat is a devil. She has tried to hurt my family and will not rest until she has supreme control over our clans. She needs to be *voice cracking* killed. That’s it. For the sake of my sanity, please don’t mix them both. I will not be able to live with myself.” He envelops Bani into a hug while muttering “Please don’t mix them….” “They are different….” “I don’t know Markaat….” “She is not my mother….”

It’s been a few minutes, but Vani are still lost in each other. Meera clears her throat, so that the come to their senses, but no avail.

Tapish and Meera wave their hands in front Bani and Veer to get their attention but it doesn’t seem to be affecting Vani.

Meera- “Ähhh….lizard…there is lizard near your feet….” No response

Meera- “First it was romantic, but now it is becoming awkward guys…”

Tapish and Meera look at each other and then Vani with fond exasperation. Tapish gives Meera a look of ‘let me handle this’ and turns into his eagle form and flies around Vani and then he flaps his wings in Vani’s faces but at the same time being careful that his talons don’t scratch their faces.

Veer- “What the….” They separate from each other.

Tapish- “Good you’re back. Welcome back to the land of the living.”

Veer- “Why are you getting jealous bhai? Even you can hug Meera like that if you want.” Tapish and Meera blush.

Vani- “And Meera di, the only person who is afraid of lizards here is you. Naagin and Cheels here remember?”

Tapish- “Okay enough of fun. Let’s get back to the reason that we all are here for.”  “So we need to find the dagger first and then get five elements. Any ideas?”

Bani- “I don’t think we necessarily have to get the dagger first. I guess we can start working on collecting the elements until we get some more information on the whereabouts of the dagger.”

Meera- “So wind, water, fire, earth and metal are the five right?”

Bani- “I am a creature of the earth. My powers will not work in air and water.”

Veer- “Sweetheart you are forgetting that your husband is an eagle. Eagles are the called as the king of the skies for a reason. We can easily get that one. But even our powers will not work in water.”

Bani- “And then there is earth, fire and metal to consider about. Not forgetting the dagger without which this is useless anyways. ”

Tapish- “Relax Bani. Let us do this one step at a time or else we will be going around in circles only. Okay?” Seeing a nod from everyone, “Okay good. I think we should ask Shukla. He must know something.”

Veer- “Why sweetheart? He is our Kulguru and he has been handling such things since Satyug. He must definitely know something that might help us.”

Veer- “I don’t understand. Please explain. Why don’t you trust him?”

Bani- “Remember when Shakura had come taking the form of Akesh, at that time Shukla and Mayuri had locked me in the Trikutu cave and Shukla was supporting Jai and Shakura in all this planning.”

Veer- “Why didn’t you tell me about this before.”

Bani- “I didn’t have any proof at that time and I didn’t know whether you and especially Daddy ji will believe me or not. You all also didn’t know about me being Aadi Naagin at that time, I think Jai must have told Shukla about that.

Now that we discussing that incident, even you have not told me where you were at that time and what were you doing that you came back injured.”

Veer- “I was captured by Jai. He was tried to kill me.”

Veer- “Same reasons. No proof. You know what our relation was then. Would you have believed me at that point in time? Actually would have believed anyone saying anything against Jai at that time? It would have been my word against him.”

Tapish- “But it is possible that he thought you were a danger to our family and so he helped Jai.”

Meera- “Jai was after your powers. By helping him, Jai would get your powers and Shukla eliminates the biggest threat to the Cheel family which is Aadi Naagin. May be he is loyal to Cheels and thought that way? He may have not known that even Veer was kidnapped.”

Bani- “That is also a possibility. But do we really need to take a risk on this?”

Veer- “No we don’t. We’ll include Shukla only if we are sure that he is on our side.”

Meera- “If not Shukla than do we have any other leads?”

Tapish- “Yes. We can check the grimoires belong to the cheels. We may find something useful in those.”

He goes and after a few minutes returns with only a single book in his hand.

Meera- “Only a thin single book?”

Veer- “Patience Meera, Patience. Now would you like to see a magic trick?” He asks her in a playful tone. He keeps the book on the coffee table of the room, “Now Meera, watch Abraca Dabra….” He places his palm of the top of the book and chants “ik scheiden terwijl ik spreek” and then the book splits into 4 tomes. 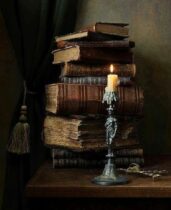 (Assume the table has only 4 books and no candle)

Veer- “4 tomes, one for each Yug. They are also never ending. As soon as you reach the last page, a new blank page appears.”

Meera fascinated by the tomes goes and picks one of them to read. “Why is this blank?”

Bani goes and checks another tome. “It is blank Veeranshu.”

Tapish- “What prank are you playing again Veer?”

Veer- “I swear I haven’t done anything to these. I have directly taken from the vault and brought it here.”

A voice is heard from the doorway. “You all think you will take the grimoires from the vault and I will not come to know?”

Balvant- “You were what? Why are the family grimoires out of the vault?”

Bani- “Actually Daddji, we are finding a way to defeat Markaat and thought that we could find some information in these.”

Balvant- “These are ‘FAMILY’ grimoires. They can only be read by cheels. If any non-cheel is present they will turn blank unless permission is given. So first tell me what do you know and what are you looking for in these only then I will decide if I should give permission. And Veer it will better if you do not take them out of the vault without asking me first.”

Veer, Bani, Tapish and Meera tell him a short version of everything that has happened and everything they have planned in the last two days.

Balvant- “Okay. I will give you the permission to read the grimoires and let me know if anything else is required. And keep me updated with all the happenings.”

Bani- “Daddyji, can I also show this to Panditainji? I think she will understand it much better.”

Balvant- “Okay, you have the permission, but they must come here to read this. I cannot allow these grimoires to go out of the house. Arrangements will be made for them here in the house, whenever they come.”

Balvant- “‘ez dihêlim hûn viya bixwînin’ Its done. Now you all have access to it. But remember it will again turn blank if anyone else is present.”

Family Grimoires– For those who don’t know, in the fantasy world a grimoire is a book of magic, it includes instructions on how to create magical objects like talismans and amulets, how to perform magical spells, charms and divination, and how to summon or invoke supernatural entities such as angels, spirits, demons, etc. and passed is on from ascendants to their descendants. Mostly these spells/rituals are family magics and are made and kept within the family, not known to general public. They also include family histories and family secrets and thus these grimoires are religiously guarded by the respective families. (In simpler words consider it to be a more precious version of family heirlooms.)

Author’s Notes– Hello to all my readers, first of all I would like to say I have escaped from Jai’s captivity (Oh shit he will also read this na?…run…)

Anyways, what do you think of this chapter? Some heavy, emotional moments and some fun ones but mostly it was just discussion. I promise there will be some action in the next chapter.

How did you like this Balvant? I believe that since he is the King of an entire species of shape- shifting eagles since Satyug, and also a millionaire business man in Kalyug, he would exude that kind of power in his speech and behaviour. Like the King that he is, he will delegate the work but keep an eye on everything and expect his orders to be followed. This is my understanding of his character and that is how I will try to portray him.

Also since many people have suggested it to me, I am also going to put this story on Wattapad. I’ll mention a link for it here when that happens. But rest assured I will continue posting at Tellyupdates also. So you can read at whichever site you are more comfortable with.

I do not own the song used in this chapter. Song credits to its owner. Also guess which couple starred in this song? (Check it out on the internet if you don’t know. Song is titled ‘Humko Tum Mil Gaye’ ).