9. Reality of Aman and Roshni

Neil slapped Aman and he looked at him sternly. 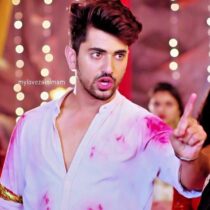 Aman palms the area where his brother slapped and his eyes become reddish and he scowls. 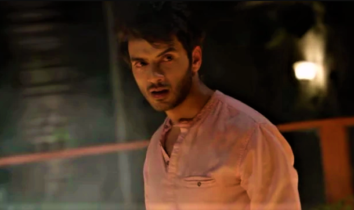 Neil knew that Aman is always a short tempered guy, but now the situation is different. He has his own motives to demolish him and Avni in any cost. Neil gets nervous seeing Aman’s eyes. Aman pulls Neil’s collar vigorously and punched Neil’s face vigorously. Neil couldn’t defend himself from his strength and violence. When Avni is about to defend Neil, he pushed her and she fell down with a thud and screams in pain. Roshni felt sympathetic for Avni and Neil even though the she wish to taste revenge. Roshni go near Neil and managed to release from the hold of her husband. Goraknath (priest) recites some mantra.

Two gigantic chains break from the opposite side of the wall and wound around Aman tightly and he was tied by the large chains. The chains grip gets tightened, but Aman didn’t scream his pain out. 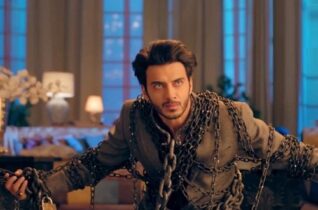 Nayantara pushed Roshni and she captivated Roshni with her powers. Avni tends to Neil’s injuries.

Aman – “If you think that you can defeat me or Roshni, then you need to know that we are not weak like you think.”

Saying this, Aman breaks the gigantic chain into debris and scattered over there. Neil, Avni, Gorakhnath and Nayantara were shocked by the sudden move of Aman, saved themselves from being hit by the debris,  by hiding behind sofa and other objects.  Aman spells his magic on Roshni and she gets released. Aman and Roshni smirk at them. They got disappeared from the place within a second.

When they breathes out and stand up, they find Roshni and Aman are absent. Nayantara touched Neil’s temples and healed the injuries.

Avni – “I could not believe that we are living amidst such toxic souls all these times considering them as our blood relatives.” 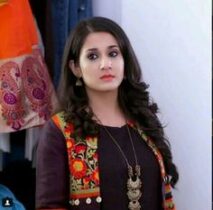 Neil remembered how Aman punched him without mercy. He gets emotional thinking the betrayal.

Neil – “Right, Avni. It is their suggestion to come here for our own honeymoon. We thought that they have selected a good place for our comfort, but it is to satisfy their intentions.”

Gorakhnath – “Their biggest strength is that they are emotionless.”

Nayantara – “But what is the reason behind everything?”

Gurudev didn’t say anything but gives them some defense materials which resists the power of Aman and Roshni. He greets them and leaves.

Nayantara looks at Avni and Neil with a guilt.

Nayantara – “Neil, I am extremely sorry for torturing you emotionally hearing the words of my so called elder sister. Please forgive me, Neil. I know I don’t deserve to be apologised. But please..”

Neil – “Nayantara, it is nowhere you are at fault. In fact, you are the one who is affected the most. We should get rid of these monsters at any cost as soon as possible.”

Nayantara weeps and Avni wipes it. 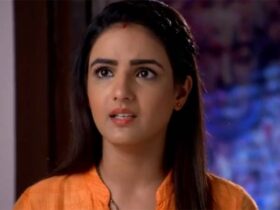 Avni – “Past is past, Nayantara. Will you help us to get destroy Aman and Roshni? We should not let them kill our family members or any others in this process. They are way too dangerous.”

Saying this Avni cries. Neil too breaks down as both could not even utter a word of killing their own brother and sister but they have to do that to save their family and others.

Nayantara – “Avni and Neil, I’ll be always with you against these monstrous creatures.”

Nayantara forwards her hands, Neil and Avni place their hands above the other hand. They are determined to kill them.

The sun sets and the moon arises and the moonlight is spread through the small of hole of a extremely dark room. The room is extremely dark and the walls are painted in dark colours. It is not something like a house existing at the ground surface seeing the intensity of moon light and the darkness. The room looked large and it was silent.

Suddenly, a single but powerful punch is being heard.  The number of punches increased gradually and slowly the location for the source of sound was shown. A guy is punching the sand bag vigorously and his spilt sweat is visible in the dim moon light. 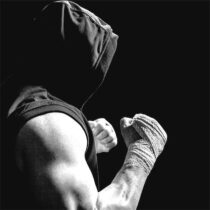 The rate of punch by him increased enormously and the bag could not resist his force thus breaking down and the sand dust was spread over there.

He gives a long breathe and took a towel and wiped his body sweat. The guy is tall and well-built and his eyes are sharp enough to study the mind of the people. He pulled the zip of his hoodie and wears it.

His mobile phone rings up. He attends the call and says, “Hello.” in a deep voice.

The receiver had said something and he laughs loudly which seem like a thunder.

He cuts the call  and says to himself, “Underestimating the power of dark made your lives dark. No one knows my mastermind game play behind all these twisted webs.”

“Four births…. Life in 4 centuries…  Uncountable murders…. Infinite betrayals… Broken Trust… One convict…. Revenge… Mastermind…. I am the king of the story and I’ll decide what will happen…” – he says and laughs like a roar of a lion.

Aman and Roshni are staying in an inn which is located 20 kilometres away from the Manali cottage where Neil and Avni staying now. Aman is looking at the childhood pic of him with Neil. Roshni looks at Aman doing this. She go near him and Aman look at her.

Roshni look at his eyes deeply which makes Aman do the same. They got lost in each other. All their agony and betrayals they faced in these four births are lightened by the eye contact. Aman could see the selfless love in the eyes of Roshni for him. Roshni could see in eyes how Aman could accept death in the hands of hers but never stop loving her at any cost.  Their eye contact can minimise the pain but not destroy the pain.

They break the eye contact and Aman is about to say something but Roshni stopped him saying, “I can understand you, Aman. There is no need of any explanations.”

Aman keeps the photos aside and sits with Roshni. Aman lies on Roshni’s lap and she caressed his hair.  Aman holds Roshni’s hands saying, “Will we ever be united?”

When Aman asked this question, tears flows out from Roshni’s eyes and goes uncontrollable. Seeing this, Aman stands up with a jerk and wiped her tears. He cupped her face, “We will be together as always. No one could separate us, Roshni.”

“Roshni…..” – Aman take her name several times to bring her out of her DREAM. She come to reality that it was a dream. 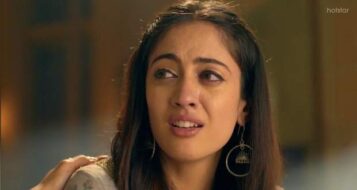 Aman – “What happened Roshni? Why are you crying?”

[FB: Aman keeps the photos aside and goes out of the room. Roshni lies on the cot]

Aman – “Oh, wait. I’ll bring you milk. Drink that and sleep peacefully. No dreams will haunt you.’

Aman placed his finger on her lips and says, “Sshhhh…” 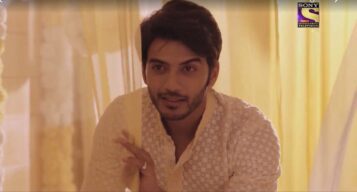 He goes out of the room. Roshni thinks, “It is not a bad dream, Aman. It is a pleasant dream or something…”

Aman comes inside with the milk and he made her drink.  Roshni smiles. Aman bids her with good night and sleeps at the next room of the inn. Both their face turns sad.

Roshni’s POV – “It is a part of our agony. We cannot stay like a couple even though we are married. We cannot have a small romantic involvement between us.  It leads to the death of other half. Why is god punishing us by giving such test?”

Aman is resting his head on the sofa with a gloomy eyes. 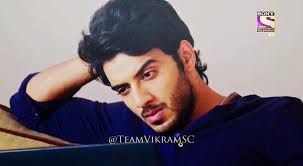 His eyes speak thousand words of his agonizing pain, what he have undergone and everything… He don’t want to cry to waste his tears. He determines to be a rock to face the life and his enemies. He should make his heart a steel to fight the battle. But only god knows that his opponent is someone else.

His thoughts go towards the place where everything started…. 15th century where he and Roshni had difference faces with different identity Rudra and Shivanya.

It is a beautiful garden where trees and flowers are found in abundance. Two snakes crawled from the branches of tree. One is a black coloured snake and another is grey coloured one. The black coloured snake transformed into a handsome guy (Arjun Bijlani) and the grey snake transformed into a beautiful girl (Mouni Roy). Both of them looked at their attire and their hands and other parts of their body.

They wondered seeing their looks as they got the boon of transforming into different avatars from snake just few hours ago. They looked at their aesthetic traditional attire. He looked at the eyes of the girl  and says, “Shivanya…” 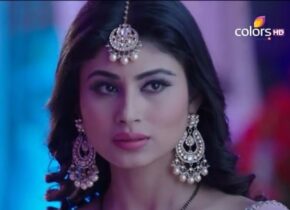 Rudra – “Finally, we got the boon of being a shape shifting serpent after the penance of 100 years.” 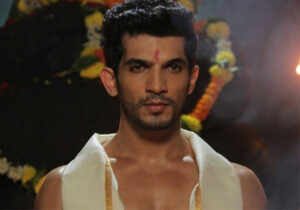 Shivanya – “We have done that, Rudra.”

“Welcome you to the new life, Rudra and Shivanya”

Shivanya and Rudra looked at the direction from where the voice comes. It is their best friends Avni and Neil who were wearing traditional dresses. (They have the same faces)

[A/N: Of course, Avni and Neil do not have the same name in their previous birth too. But I am using the same name to avoid confusion while reading]

Author’s note: Hello friends, hope all are doing well. I am extremely sorry for the inconvenience in posting the episodes on time as my schools have been reopened and I am quite busy with the school works. My exams are starting on Monday and the schedule is really tight so I’ll try to post the episodes as soon as possible whenever I get time. Please give your support to this FF.