Home
Bollywood
Babil thanks Filmfare for recognising Irrfan Khan’s craft, criticises scribes who asked if ‘he was high’

Late Bollywood actor Irrfan Khan has been posthumously honoured with the Best Actor in a Leading Role and Lifetime Achievement Award for his last release ‘Angrezi Medium’. His son Babil Khan on Sunday penned a note of thanks to Filmfare for recognising his father’s contribution to the film industry. ‘Angrezi Medium’ was released theatrically on March 13, 2020, and was last actor’s last film. Not just this, Babil also slammed the seven journalists who asked him if he was ‘high’ during the 66th Filmfare Awards ceremony.

On Saturday evening, Babil collected two awards bestowed to his late father Irrfan Khan at the Filmfare Awards. Taking to his Instagram account, Babil shared a picture that featured all the six Black lady accolades honoured to Irfrfan, including the latest addition of ‘Best Actor (Male)’ and ‘Life Time Achievement’ award.

Alongside the picture, he wrote, “Thank you FILMFARE! Even after he has departed you have recognised his commitment to his craft. We as a family are so grateful.”

On the other hand, Babil also criticised the journalists who asked him if he was ‘high’ during the award ceremony. By sharing a lengthy note, he wrote, “JUST WANTED TO SHARE WITH YALL THAT I ATTENTENDED (attended) THE FILMFARE AWARDS YESTERDAY AND 7 JOURNALISTS ASKED ME IF I WAS HIGH JUST BECAUSE OF THE SHAPE OF MY EYES. WELL DONE GUYS. GREAT INQUISITIVE RESEARCH THAT YOU HAVE CONDUCTED.”

“BECAUSE I have been pure natural since I left university. really good job” added Babil. 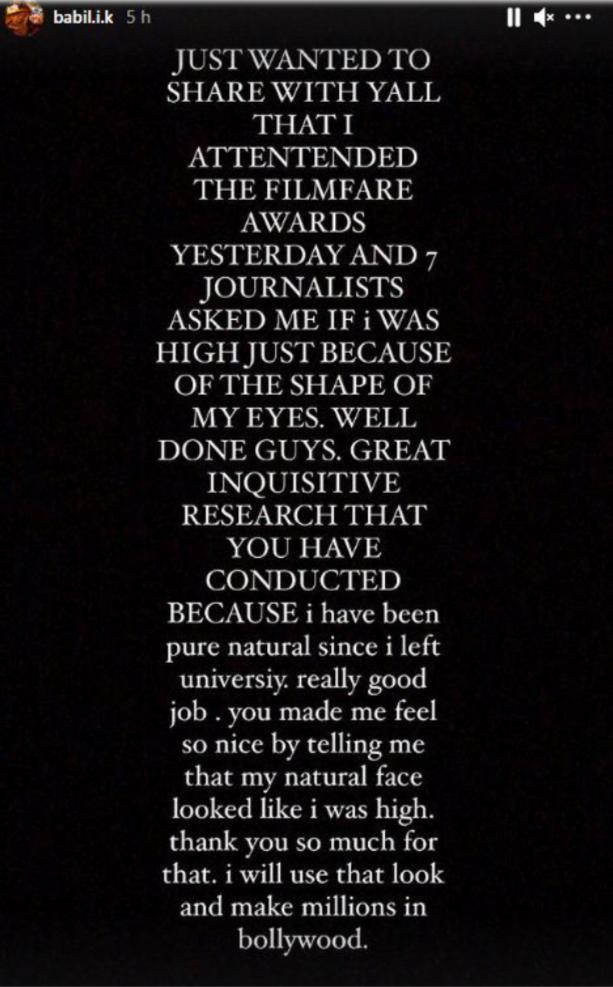 Clapping back at the journalists who asked him if he was ‘high’, he wrote, “you made me feel so nice by telling me that my natural face looked like I was high. thank you so much for that.” Concluding the note, Khan said,”I will use that look and make millions in Bollywood.”

For those unversed, Irrfan died on April 29 last year in Mumbai at the age of 53 last year after a long battle with cancer.