Bollywood films are enjoyed by the masses because of the over-the-top celebrations that are shown on screen. On the occasion of Holi, we are made to reminisce all those movies that had some fun filled holi songs in them. There have been quite a few movies over the years that have had some iconic Holi songs that got tremendously popular as soon as the masses saw their favourite B-town celebrities dancing to some foot-tapping tunes and celebrating the festival of colours. Let us have a look at them:

A movie that struck up so many controversies for a lot of many reasons. However, it also gave us one of the most iconic Amitabh Bachchan Holi songs – Rang barse. Amidst all the celebration there is an intense scene going on and Jaya Bachchan and Rekha are seen applying gulaal on each other’s cheeks as well.

Who can forget the amazing camaraderie between Hema Malini and Dharmendra as they danced their hearts away to Holi Ke Din from the mega-blockbuster film – Sholay. There is a lot of drama and energy in the scenes played during the Holi sequence, however, Dharmendra and Hema Malini’s chemistry as they play with colours is the highlight. 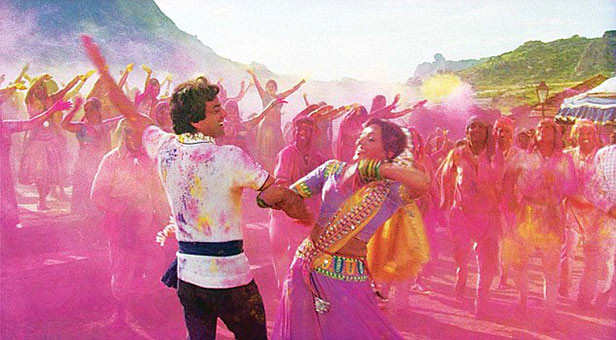 Deepika Padukone and Ranveer Singh’s first movie together and they sure established the fact that their chemistry will always skyrocket the roof. The first scene in which the two of them interact with each other is a holi scene. The sizzling chemistry between the two as Deepika applies colour on herself while flirting with Ranveer Singh was a treat for their fans. 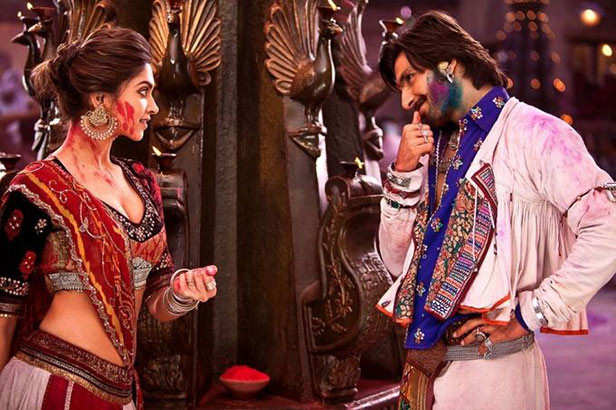 Deepika seems to have quite a few Holi scenes in some of her biggest blockbusters. Balam Pichkari to date is played in every holi celebration and the song was one of the biggest hits in the album. The song is high on energy as Ranbir Kapoor and Deepika Padukone are seen dancing away with no care in the world as they splash colours at each other in the song. 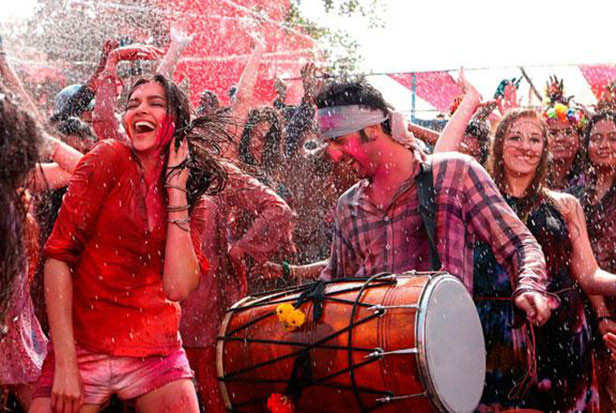 Who can forget Shah Rukh Khan being his ever charming self as he somehow manages to let all the students in the gurukul already painted with the colour of love, go outside and celebrate this festival of colours. As the song Soni Soni plays in the background, this movie scene is filled with a lot of colours and everyone coming together on the occasion of Holi and ultimately the strict principal, played by Amitabh Bachchan also caves in and accepts it.

Do me a favour, Let’s play Holi – Waqt : Race against Time

Once upon a time, the sizzling chemistry between Akshay Kumar and Priyanka Chopra was loved by their fans on screen. Out of the movies done together, their film Waqt: Race against time which also had Amitabh Bachchan playing a crucial role had a holi song named- Do me a favour, Let’s play Holi. Though the Holi sequence leads to an intense scene in the narrative of the film, the song is one of the happiest Holi songs seen in Bollywood films. 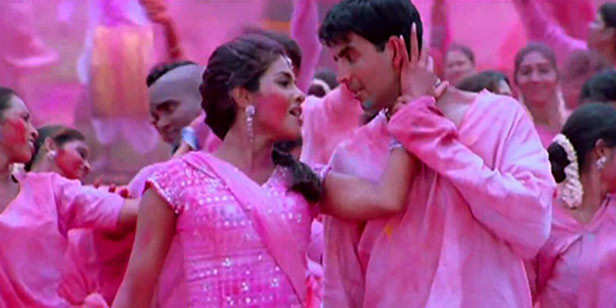