Viewers are rediscovering the magic of Sushmita Sen, thanks to her recent hit series Aarya, where she plays an upper-class housewife forced to take to a life of crime for the safety of her family. Beauty pageants are said to be an entry of sorts to films and after having won the Miss Universe crown in 1994, Sushmita Sen was much in demand indeed. Her debut film Dastak (1996), directed by Mahesh Bhatt, had her playing a beauty queen haunted by an obsessive fan. The film didn’t do well at the box office, however. She kept getting offers but never actually realised her true potential. Here’s looking at some of her best films down the years…

It was a musical hit whose songs are still popular. The film’ director Agathiyan remade his own hit Tamil film Kadhal Kottai (1996), starring Ajith, Devyani and Heera Rajgopal into Hindi. Nadeem Shravan gave the music. Sushmita is best remembered for her hit song Dilbar from the film. It’s a story of two strangers falling in love through an exchange of letters. Deepak Rai (Sanjay Kapoor) comes across a purse that contains educational certificates belonging to Aarti (Priya Gill). She lives in Nainital and he mails her belongings back to her. They start writing letters to each other and grow fond of each other despite not meeting in person or even exchanging photos. Neha (Sushmita Sen), Deepak’s boss is obsessed over him but he doesn’t give in to the temptation as he loves Aarti. The lovers meet after a set of coincidences and live happily ever after. Though she only had a supporting role in the film, Sushmita still left an impact.

Sushmita played the other woman in this David Dhawan’s take on Pati Patni Aur Woh. The song, Chunri chunri, picturised on her became hugely famous. She won the Filmfare Best Supporting Actor trophy for her role. Prem (Salman Khan) is married to Pooja (Karisma Kapoor), and they are parents of two children. Rupali Walia (Sushmita Sen) arrives at Prem’s office to give an interview and he falls head over heels for her. She too begins to like him. Unlike his traditional, sanskari wife, Rupali is much more modern and fashionable. Pooja once discovers Prem at Rupali’s house and asks him to choose between her and Roopali. Prem chooses Rupali and moves in with her, leaving his children and mother (Himani Shivpuri) in Pooja’s care. How Pooja wins her husband back with the help of Prem’s pal Lakhan Singh (Anil Kapoor) forms the crux of the story.

The movie dealt with the sensitive issue of surrogate motherhood. Meghna Gulzar, daughter of lyricist and filmmaker Gulzar and actress Raakhee, made her directorial debut with it. It remains one of the most sensitive roles of her career. She plays a girl who says yes to be the surrogate mother of her best friend’s child and faces the complications that arise out of such a delicate relationship. Rewa Singh (Tabu) and Sia Sheth (Sushmita Sen) are best friends. Having grown up together, the pair are inseparable and are always there for each other. While Rewa always wanted to marry, settle down, have children, Sia is more career-oriented and is somewhat of a commitment-phobic individual and keeps turning down her boyfriend Sahil’s (Palash Sen) proposals. Rewa gets married to Dhruv (Sanjay Suri). However, she goes into depression when she finds out she can’t conceive. Sia radically proposes to bear her child. The move is opposed by Sahil, who even breaks ties with her. However, this solution gives birth to its own set of complications. Rewa starts feeling envious of Sia, especially after the birth of a healthy baby. She feels that Sahil has been showering all his attention on Sia. This spoils relations between the two friends. Thankfully, Dhruv and Rewa decide to move away. Sia too mends relations with Sahil, so it all ends well.

Bank manager Vijay Singh Rajput (Amitabh Bachchan) loses his job after beating up a clerk black and blue for allegedly embezzling money. He wants to teach his former employers a lesson and concocts a far-fetched plan to exact his revenge. He unearths three blind men — Vishwas (Akshay Kumar), a blind person who has the power of the sixth sense, Elias (Paresh Rawal) and Arjun (Arjun Rampal) and blackmails Neha (Sushmita Sen) who is a teacher at the school for the blind to teach them how to rob a bank. The heist is successful but the three blind men turn the tables on Vijay by refusing to tell him where they have hidden the jewels, resulting in him turning vicious towards them at first. Later, he unwittingly confesses his crimes in front of the police and is caught in his own web of lies and deceit. 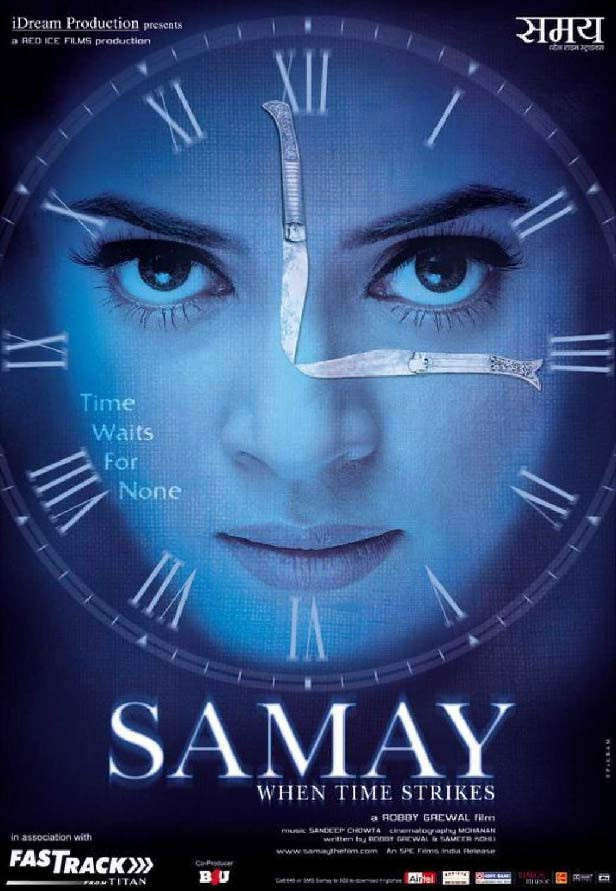 The film was based on the Hollywood thriller Se7en (1995), starring Morgan Freeman and Brad Pitt. Sushmita played a cop reportedly for the first time in her career. ACP Malvika Chauhan (Sushmita Sen) is a widowed cop with a 10-year-old daughter. She’s assigned to investigate the murder of a reputed businessman. Each murder follows an interesting pattern-the first victim was killed at 12, the second at 3 and the third at 6. And each victim had defective eyesight with a power of -2. The plot had several twists and turns and had the killer playing games with Sushmita’s character. The film keeps you rooted till the end and you’re unprepared for its rather grim ending. The film had her solving the crime in a systematic manner and she looked good in the action sequences as well. It’s certainly one of the better films of her career. 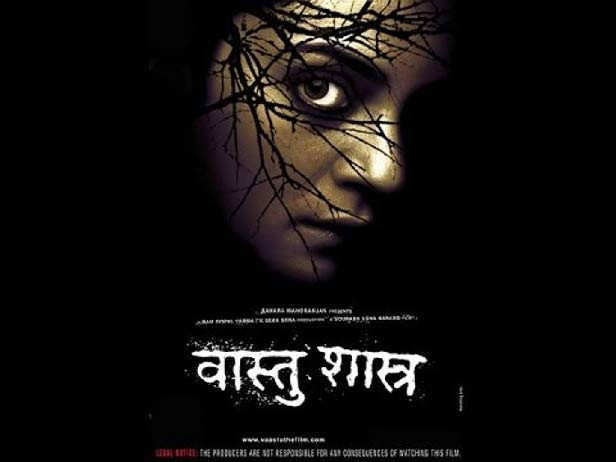 This was a horror film produced by Ram Gopal Varma back when he was quite taken in by horror stories. It had a creepy suspense and Sushmita fitted right in with the proceedings. The eerie background score and the apt cinematography added to the film’s appeal. The plot revolves around a tree where the evil spirits reside. The ending hinted towards a sequel which never got made. Sushmita and her husband move into a new house. Ghosts befriend her son. They are warning him to go away from the house as it’s haunted by malevolent spirits. But the child doesn’t understand. The spirits first kill the evil maid. Then, her younger sister and her boyfriend get killed. Her husband gets turned into a zombie. The film was gorefest galore indeed. The curse ends when she runs her car against the tree in her compound and it starts burning because of the accident. But it might not be truly over as her son’s eyes turn completely black in the last frame. 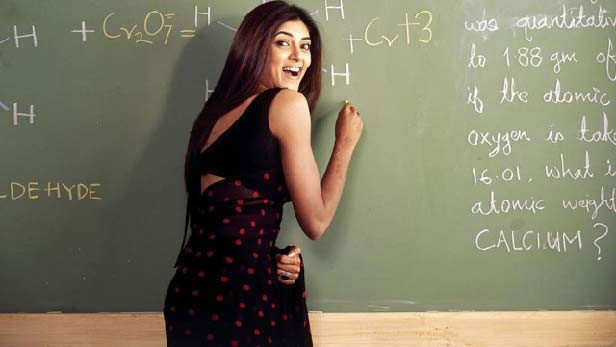 The film marked the directorial debut of Farah Khan and could be said to be a homage of sorts to the Salim-Javed films of yore. Major Ram Prasad Sharma (Shah Rukh Khan) goes undercover in a college to keep an eye on Sanjana “Sanju” Bakshi, General Bakshi’s (Kabir Bedi) daughter, as she’s under threat. There, he reconciles with Lakshman “Lucky” Prasad Sharma, his half-brother and stepmother Madhu Sharma (Kirron Kher). Sushmita Sen played Miss Chandni Chopra, the hot Chemistry Teacher whom everyone fantasizes about. Ram too falls for her charms and the dream sequences featuring them are some of the most delightful scenes of the film. It was one of the last big hits of her career. 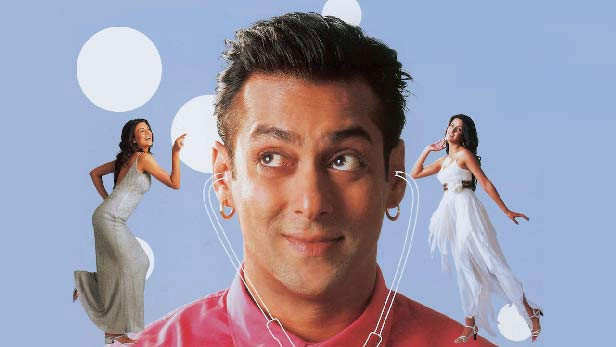 It is based on the 1969 movie Cactus Flower, starring Walter Matthau, Ingrid Bergman, and Goldie Hawn. Samir (Salman Khan) is a very successful doctor who happens to be a ladies man as well. He’s commitment-phobic and doesn’t want to marry. Naina (Sushmita Sen), is his nurse who secretly loves him but has never spoken about her feelings. Whenever a girl starts getting too close, Samir puts her off saying he’s already married. He tries the trick on Sonia (Katrina Kaif), a beautiful young woman whom he’s currently having an affair with. Sonia wants to meet his wife and Samir introduces Naina, as well as her niece and nephew, as his wife and children. Later, he’s forced to get a ‘divorce’ from a wife he hasn’t married in order to marry Neha. But he realises he doesn’t love her after all and she too isn’t truly in love with him. The only woman who truly loved him was Naina, who is on the verge of taking a flight to Canada. He rushes to the airport and stops her, leading to a happy ending. 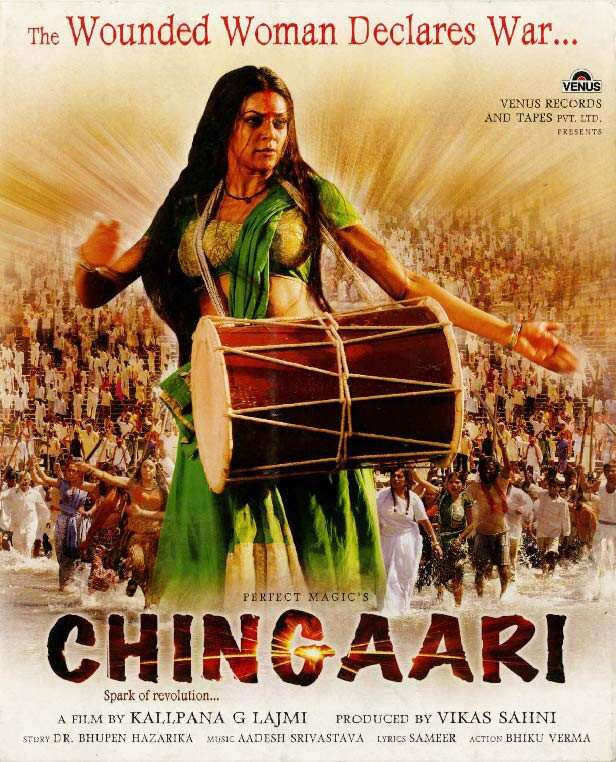 The film is based on the novel, The Prostitute and the Postman by Bhupen Hazarika. It was an art film which spoke against the distorted religious practices. Mithun Chakraborty played a negative role in the film, while Sushmita Sen played a prostitute. Basanti (Sushmita Sen) is a prostitute, while Chandan (Anuj Sawhney) is a newly recruited postman who falls for her. Basanti wants a better life for her daughter and Chandan promises to marry her and give them both a better life. Bhuvan Panda (Mithun Chakraborty) is the village priest and a regular customer of Basanti. He has a huge influence over the village and thinks of himself as God incarnate. He’s jealous of Chandan’s closeness to Basanti and kills him. When Basanti comes to know of this, she makes the village realise Bhuvan’s true colours and storms the temple with the help of the villagers. She finally succeeds in killing Bhuvan, exacting her revenge and freeing everyone from his hold. Though the film was commercially unsuccessful, Sushmita was praised by the critics for her acting.