Home
Bollywood
Friends Reunion Review: Comforting, nostalgic and reminder that they’ll be there for you

“It’s beautiful.” “I got chills.” ‘I need tissue box, lots of them.” These are not fan reactions but what cast members of the iconic American sitcom said as they unlocked that purple door again. And it’s everything you feel while watching this impeccable reunion. After much delay, the Friends Reunion special episode premiered jolting many sentiments, nostalgia being the dominating one.

With a runtime of 100 minutes, the episode was a big ‘Throwback Thursday’ post for not only fans of the show but the cast too. The episode relayed between some iconic moments from the show and the actors recalling them. If LeBlanc hadn’t had grey hair, it was almost absurd to believe that it has been 17 years since the last episode of the show aired. It’s very on the table to see that living with these characters for 10 years has left an impression on these stars. There’s some Monica Geller in Courtney Cox, Rachel Green in Jennifer Aniston, Phoebe Buffay in Lisa Kudrow, Joey Tribbiani in Matt LeBlanc, Chandler Bing in Mathew Perry and Ross Geller in David Schwimmer.

Throughout the episode, it is emotions that run high. From Kudrow’s squeaky laugh to LeBlanc’s witty comments and from an overly emotional Aniston to Perry who was seemingly lost of words, everybody manages to strike a chord with the viewers. Every time they hustle and hug it is comforting to watch the on-screen camaraderie of the cast translating into real life. It is apparent how Aniston and Cox have bonded well over the years as compared to the others. But it was unexpected, how Aniston and Perry casually talk about their respective exes Brad Pitt and Julia Roberts appearing on the show. But, I kind of missed Perry. He has so little to speak. However, LeBlanc covers up for him well. Even after 17 years and some extra kilos, he manages to be charming. In fact, he is the chatty one with a bucket full of anecdotes to share with all. 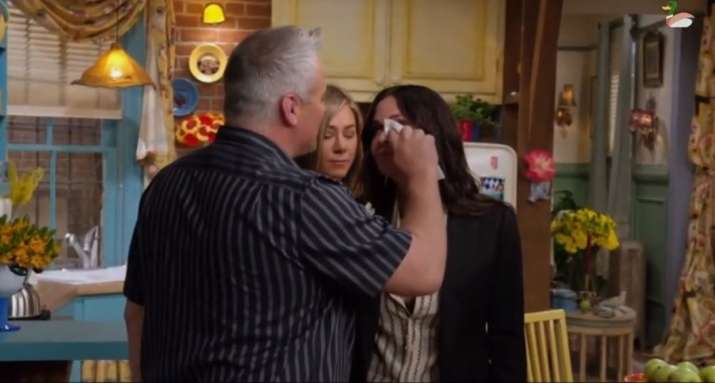 Whenever an old cast member like Richard, Janice or Gunther made a special appearance, it sorts of gives a feeling of pride that not only you still recognise them but you remember their parts well. It takes you back to the show with a good dangling feeling. The Studios is imperative in making us believe that because it is enough natural and reassuring to watch these in a known setup.

Raising the stakes by not limiting this merely to a long interview or a talk show, the makers smartly let the original cast of Friends discuss their experiences, juxtaposing memorable flashes from the show. It is because of the addition of these episode bits that it never gets tiring or exhausting to listen to these people with whom generations resonate.

What adds a spark to this special was the diverse list of guests. It is a delight to see Lady Gaga singing Smelly Cat with Kudrow or K-pop band BTS sharing their piece or Justin Bieber walking the ramp in Ross’ outfit. My personal favourite being international soccer player David Beckham and actor Kit Harrington explaining their go-to Friends episodes. 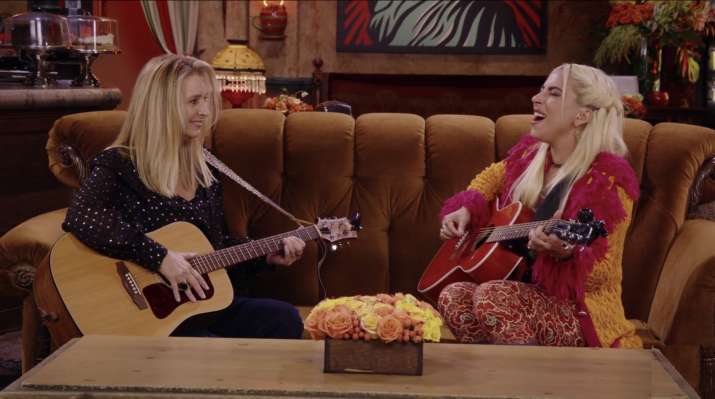 Apart from this, the bloopers and behind-the-scene roll can be counted as the best bit from the special. They’re hilarious and entertaining to watch over and over again. However, the fashion show and quiz didn’t really work for me. The costume show missed numerous memorable outfits and the quiz seemed more rehearsed than spontaneous. But these can be quickly overlooked.

If you are an ardent Friends fan, there’s probably nothing new for you to see. You have heard them say these things individually on different occasions, you’re familiar with the bloopers and of course, you have watched the episodes, but how they are transfused in a fine timeline is a trick director Ben Winston successfully mastered. Execution has been the strongest suit of this special and once again Friends sets an example of how to present a mix of massive cast members each very different from one another.

Just like the show, the special leaves you with an overwhelming satisfactory feeling. You know it’s ending, you realise there’s nothing more to it, but you’re happy with whatever you’re served. Cox sums it up perfectly, the special is “such a great feeling to carry on forever.”

Friends: The Reunion can be streamed on Zee5 in India.