Shivaay : Bade paapa what’s happeneing here ? I can’t believe that you have keep these kind of thought for your daughter in law. She is from our family. She is Oberoi.

Tej : What ? It’s you who says that Gauri is an Oberoi ? You yourself don’t have any surname or any kind of family and that’s the truth.

Rudra : Paapa have you lost your brain ? What’s wrong with you ?

Tej : I am saying with full of consciousness only, Rudra. Shivaay it’s time for you to get aware about your identity. Better ask Shakti . He is coming here with Pinky. Look at them

Tej points his finger back on the entrance and Sanky makes an entry there . They are surprised to see Shivomru

Shivaay rushes near Pinky and holds her hand. He wasn’t able to look at his mother’s eyes. Pinky gets panic.

Pinky : Before my heart beats gets lows please some one tell me what happened to my Raja beta ?

Omkara : Choti maa. As usual bade paapa made a statement which he should not have been spoken. This time he has hurt our Shivaay 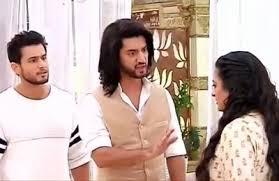 Tej : Oh Come on Sakthi !! How long you will keep secrets as always mystery ? Truth has to be come out some day just like these three captured me today I uttered your heart’s secret to them. About your prince charming Shivaay that he is not a part of this Oberoi family. 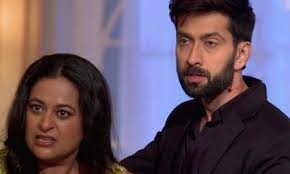 Tej : Sakthi you didn’t share this with your wife ? So many years have gone and still you never told her that she lost her baby at her pregnancy. She hadmuch difficulty in conceiving a baby. But still she was adamant to have her baby years back as she was so much proud that before Jhanvi she is going to give the heir of Oberoi family. Bit fact is that her delivery was not a normal none. It was cesarean and during the operation itself baby got dead and you was much panic that how you should share this truth to your sweet heart . So you replaced a child there who was born at the same date by offering 1 lakh to the actual mother who even don’t want to give birth to her son since her husband ditched her. By co -incidence she was on the same hospital at the same day when Pinky was bought for her delivery. Am I right ?

Sakthi : Whatever bhaiya said it’s the bitter truth of our life Pinky. You didn’t give birth to Shivaay. 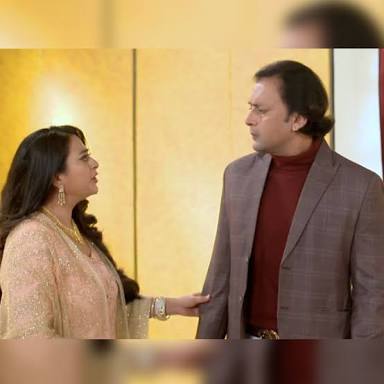 Rudra : No , yeh sab jhoot hein. Shivaay bhaiya is always our great wall . He is our brother.

Shivaay gets disheartened and he was unable to say anything. Pinky holds Shivaay’s hands. 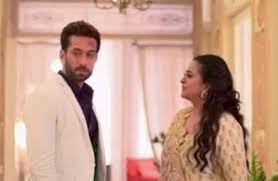 Shivomru are shocked to bear the truth. Three of them are shattered . 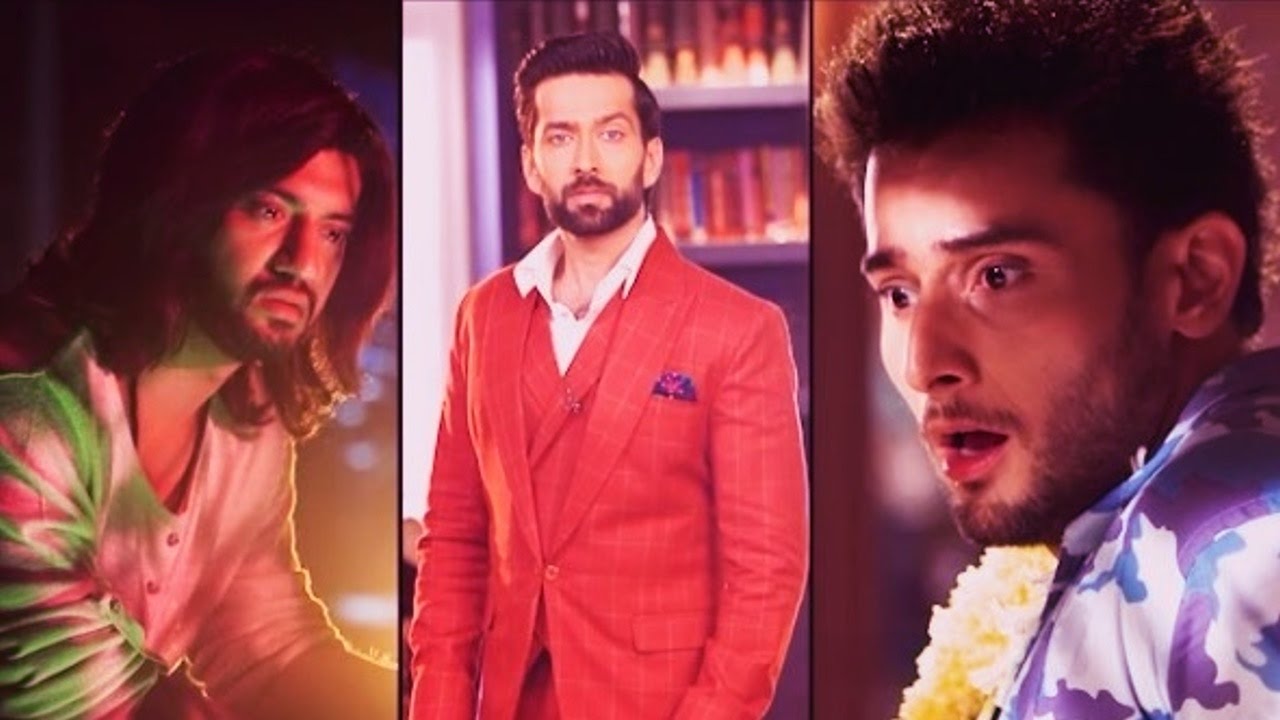 Pinky : Om, Rudra guys at least you too talk to Shivaay. Tell him to talk bachhon. Please.

Omru comes close towards Shivaay and three of them hug and break down in tears. 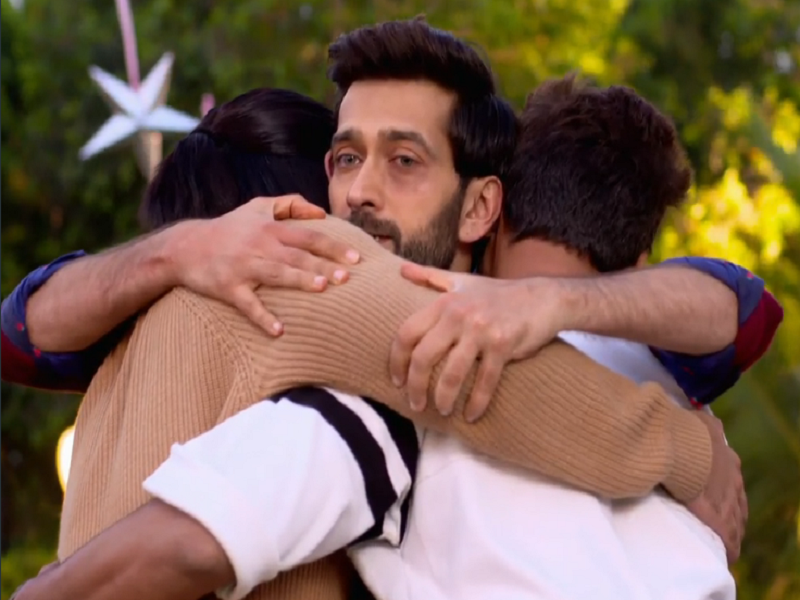 Rudra : Shivaay bhaiya You are not alone.

Omkara ; This is not your  own fight Shivaay. I don’t believe in any family tag or blood. What I believe is heart’s truth. You have made your brothers to grow up. Whatever be the behind story I don’t want to go behind them . Be bold Shivaay, Raise your hand

Rudra : Haa bhaiya raise your hand. Shivomru are always together. 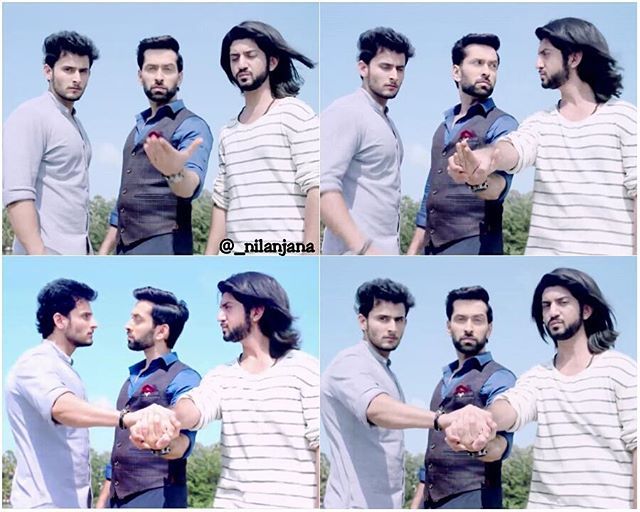 Shivaay : One for All

Three of them hold their hands together and looks Tej .

Pinky looks them and break down in tears. 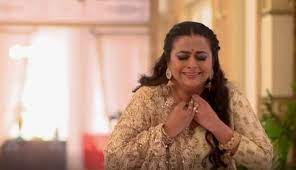 Omkara : Choti maa He is our Great wall of Shivaay Singh Oberoi. No one can break it and if any body dare to break this wall then he will have to fight with me. I promise you that always Shivaay is our big brother.

Shivaay : Mom, Trust me whatever story just now you heard think it as a night mare only. My brothers are with me and they are my world. Nothing can separate me from them . Ups and downs happens in life.  But your son is always static and that’s he – SSO . Maa you really think that you don’t give birth to Shivaay ? Maa  you was, you are and only you can be the best mom of Shivaay. This is the truth and I don’t know anything else , Mom. 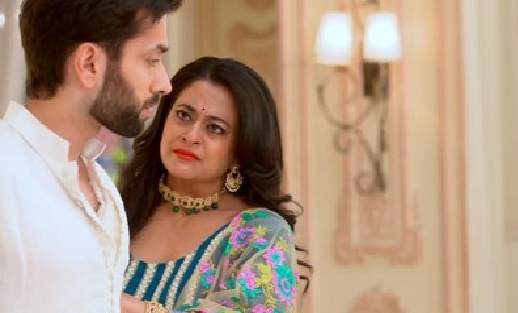 Shivaay shows his signature style and walked towards the exit. 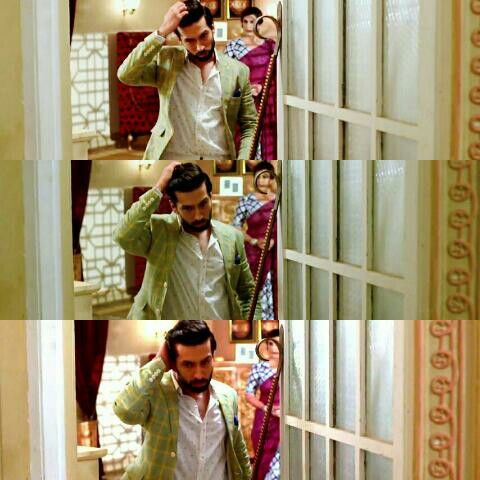 Tej : Great attitude. I have opened your hidden reality and it doesn’t hurt you little a bit !!

Shivaay : Bade Paapa , I still respect you because you are my dad’s brother and father of my brothers. But it doesn’t mean that you keeps degrading me and I will tolerate everything. You know What I am and it won’t take much time for me to show your real face to this whole world .

Tej : A man whose price is just One Lakh only  keeps chattering and no one is questioning him. Strange !!

Shivaay turns back and fumes in anger

Shivaay : Haan hein meri keemat Ek Lakh . Toh kya hua aapko ? Aap jaise log joh apne hee pariwar ke khilaf  ladai kar rahe hein unkee toh koyi keemat hee nahi hein pariwar mein. Shame on you Mr. Tej Singh Oberoi that you have crossed all the limits of decency and let me remind you one thing that after making all strategies and games a day will come when no one will be with you and that day you will realize the real pain of wounded heart. So be ready for the battle

Rudra : Bhaiya why you are wasting time by keeping fight with him ? Jiss kaam ke liye aaye the  woh karna zaruri hein .

Tej : What non-sense is this ?

Ranveer : Swethlana is been cured and we have find out that you are among one of the persons who have ruined her life. Dr. Rohit Upadhyay and Dr. Vijayendra Saxena has been caught now. We captured Saxena from Delhi and he told that you are here uncle. What about Harsh ?

Tej ; He was with me only just before you guys arrived.

Ranveer tells officers to check the whole area . One of the officer comes and reports that some one has escaped through the sea. Since the sea was very close to the resort he have jumped from back door straightly to the sea.

Ranveer : I will inform Goa police and also we had to assign expert Divers who can go deep inside to sea and capture him. He can’t swim too much as sea is vast and chances are two – One is he might be eloped in boat or ship. Second is he might be drowned in sea.

Sakthi : Shivaay, what’s going on ? Why Ranveer is arresting bhaiya ?

Shivaay : Paapa I will tell you in detail later. We need to go it’s important.

Sakthi : Beta when your badi maa will come what will we say ?

On the other hand at a boutique ,Jhanvi dresses up beautifully and recalls her sweet moments with Tej 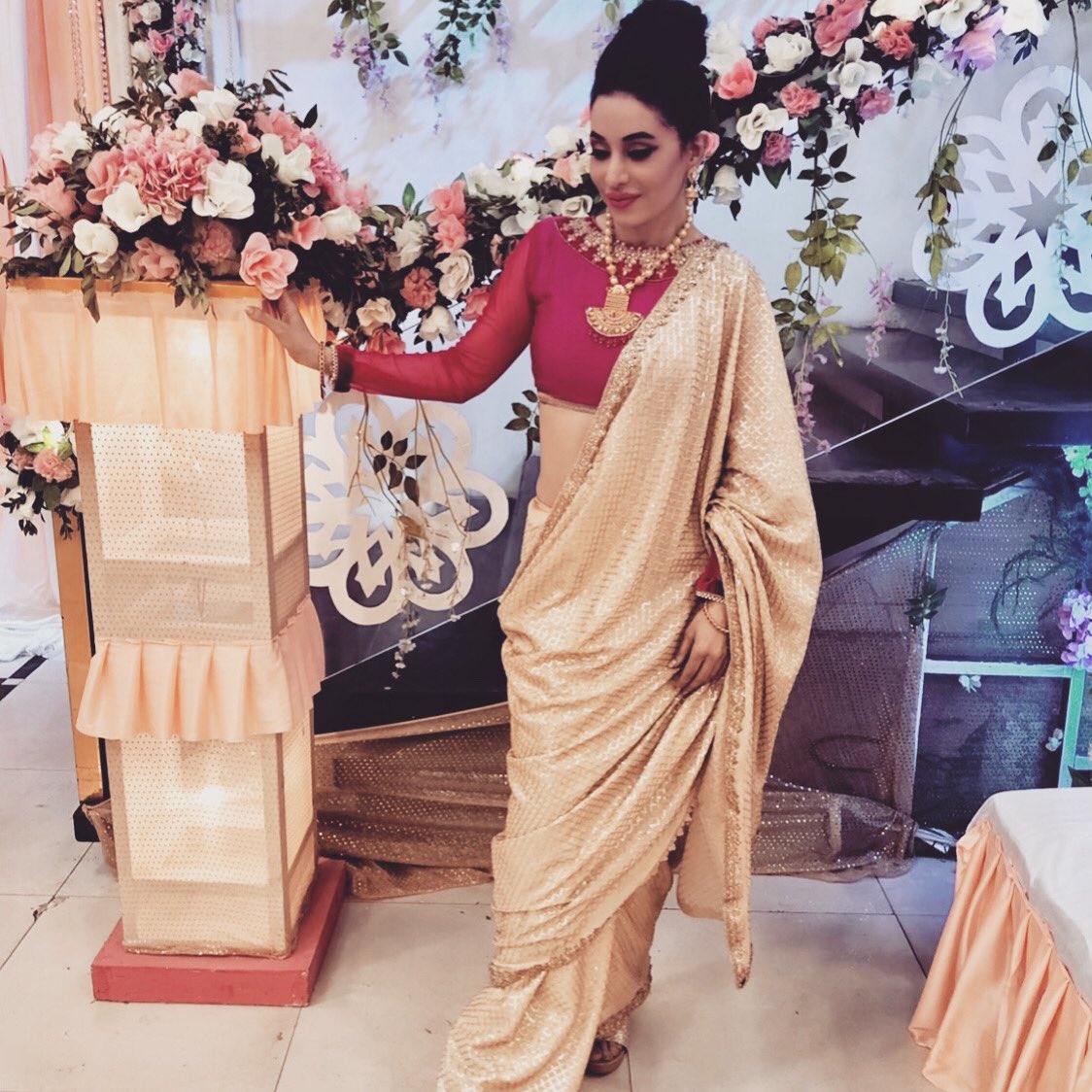 Tej really likes me in this dress. These flowers reminds me the most memorable day of my life- When he proposed me infornt of our families with a dance that day itself when he came as Ladke waala. I was wondered to see Tej like that . He was so cute that time 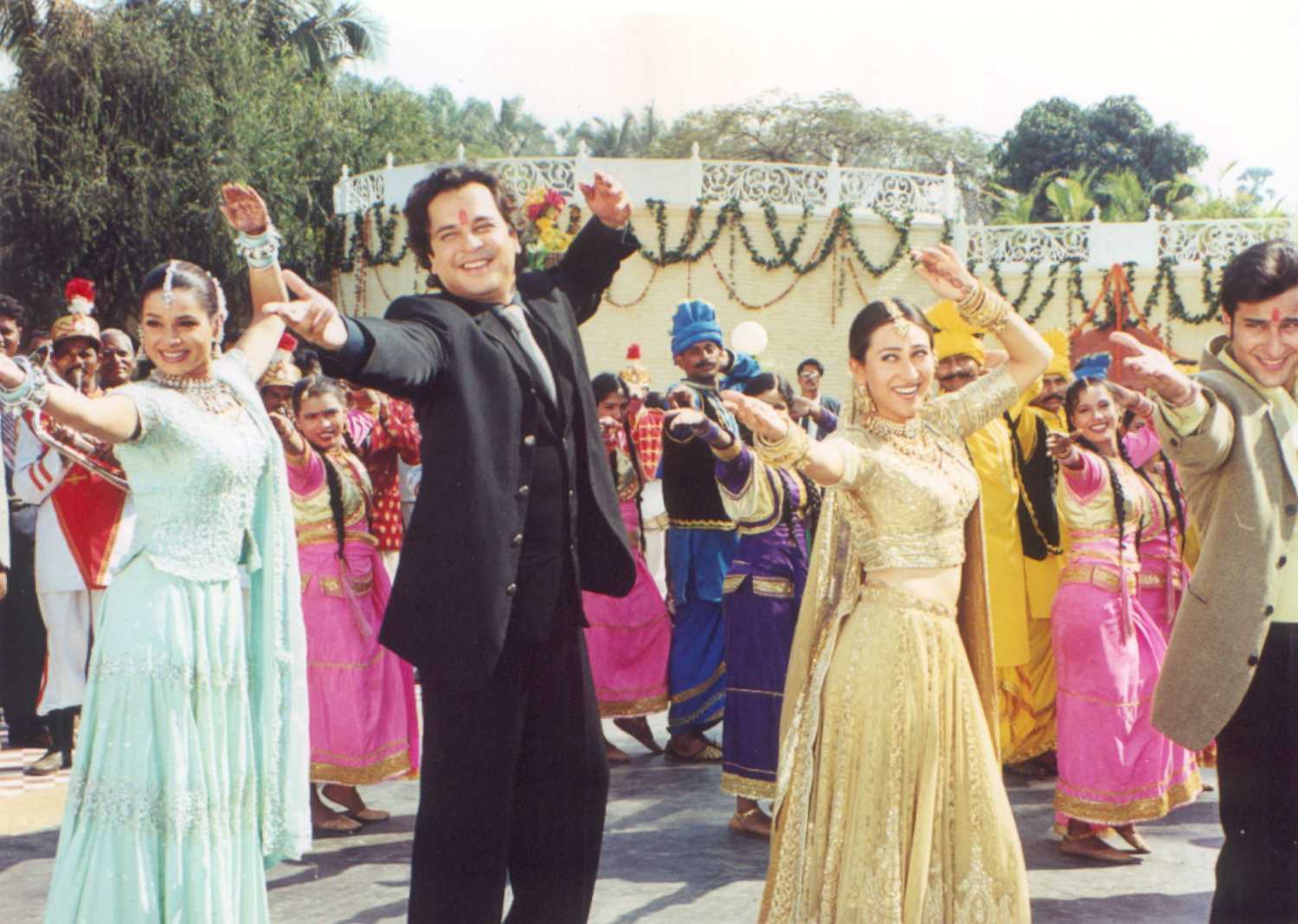 Uday : Why are you thanking me ? Yeh toh mera farz hein . If you don’t mind can I ask you something ?

Uday : I mean you both are best  friends

Uday : I guessed so I mean the way you both were arguing I felt you both knows each other very well.

Bhavya : I see , Yeah I know Amith . I mean for the last few years I know. Actually he did my treatement when my left hand’s bone got hit during a police encounter. Kaafi time se hospital mein admit hona pada and he supported me a lot. We became friends that time.

Uday : Nice. So you think mostly girls will like him.

Bhavya : May be But why are you asking so much ?

Uday takes his phone and shows the pic of a girl 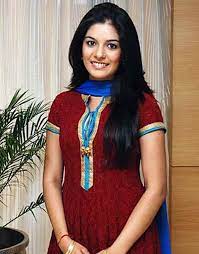 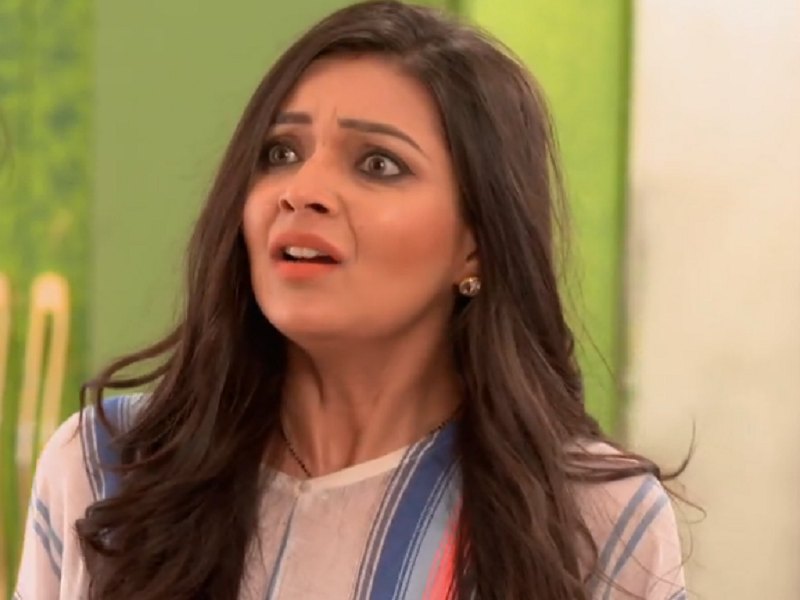 Uday : How will be them ? I mean Amith and Avantika , I think he is the best choice for Amith.  Hey naa. Two years back Avantika captured a pic with Amith. Actually that was a part of her survey which she was conducting among doctors. And you know what she titled the photo as The Handsome Doctor with a Cute Patient. See how it is ?

Bhavya gets jealous in anger  Bhavya : Total bakwaas. How can she say that doctor is handsome ?

Bhavya : You are special Uday. But not all

Bhavya : Yeah you are special. I mean you are so cool guy . And I like you. 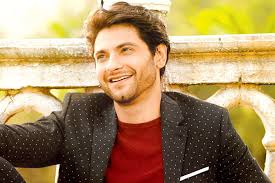 Amit overhears them and gets jealous. He interrupts them .

Uday : Hi Amith just now we were talking about you. 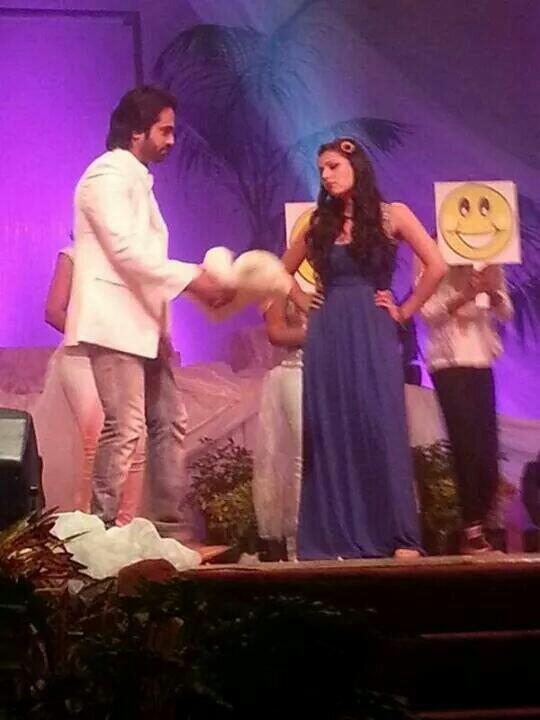 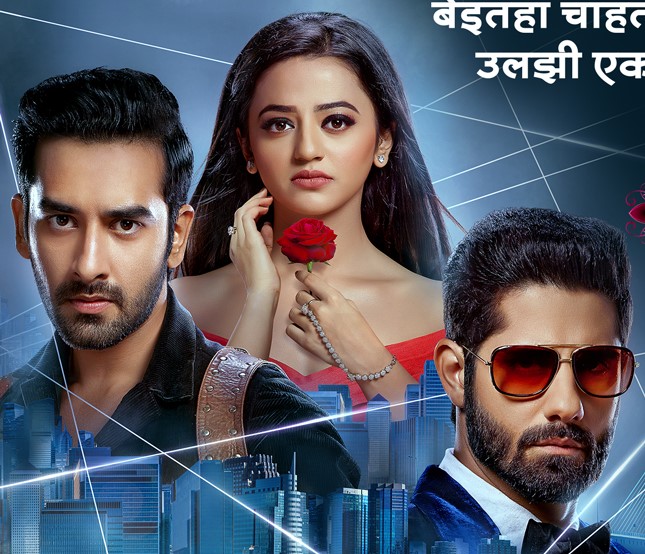