The Episode starts with Shalu blaming herself for Rishi and Malishka’s engagement. Bani nods no. Lakshmi gets Shalu’s call and picks it. Bani is on call and asks if she is fine? Lakshmi asks if Shalu is with you. Bani asks if you are fine. Lakshmi says you know that your sister is strong and brave and asks her not to worry. Bani asks again. Lakshmi says I know that Malishka had called you. She asks them not to worry and says she is really fine. Bani asks her to say. Lakshmi says I am fine, says what is a big deal if Rishi wants to get engaged to someone. It doesn’t matter, I am fine. She says she is not feeling bad as she has come here for some days. She ends the call and cries. Shalu says she is shattered and is in pain. She blames herself for Lakshmi’s pain. Lakshmi looks at Rishi’s photo frame on the wall and says you had never said that you love me and wants to be with me, then why did I feel and thought. She says I am feeling so much pain and is responsible for this pain, I thought this one year marriage as the relation of 7 births, when it is not real. She cries. 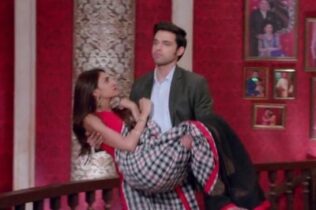