Dani Sanchez-Lopez, cinematographer of ‘Virata Parvam’, on taking cues from documentaries and Russian cinema for a realistic depiction of Telangana villages

Dani Sanchez-Lopez, cinematographer of ‘Virata Parvam’, on taking cues from documentaries and Russian cinema for a realistic depiction of Telangana villages

Dani Sanchez-Lopez was barely seven when he had made up his mind that he would grow up and be a part of cinema. His initial fascination was for acting until he discovered that actors spoke lines written by others. He grew interested in writing, direction and editing and got an introduction to all of these. It was while studying filmmaking at Chapman University, California, that he realised he enjoyed narrating stories visually.

He had found his calling in cinematography. What Dani, of Spanish origin, did not foresee was that he would take up projects in India and work in Telugu cinema. His collaboration with director Nag Ashwin for the Savitri biopic Mahanati had him experimenting with visual textures that complemented every decade of the story. Post Mahanati, Dani came on board for director Gunashekhar’s Hiranya, starring Rana Daggubati as Hiranyakashipu. The project is in the works and, in the meantime, he was roped in for Virata Parvam. Incidentally, his first Indian project was supposed to be Chaitanya Tamhane’s Court. “We spent countless evenings in Versova, Mumbai, discussing the film and how we can portray India. By the time Chaitanya got funding and the project was ready for filming, I was in Pakistan working on another project,” Dani recalls.

Dani has different agents coordinating projects for him in Spain, India and Los Angeles and says his focus has been to take up films that are exciting, irrespective of their scale and budget.

The Sai Pallavi and Rana Daggubati starrer Virata Parvam directed by Venu Udugula is a niche project that is getting noticed for its offbeat approach to filmmaking. Dani, who gave the film a distinct visual quality, says he was impressed reading a 30-page synopsis translated from Telugu. “When I first met Venu, he apologised stating that his English was not good. I felt awkward and said it should be the other way around — I am the outsider who does not know Telugu.”

Soon, Dani and the director watched documentaries filmed in Telangana and Andhra Pradesh to observe how the villages were portrayed realistically. The two also share a common interest in Russian films. “I like the hypnotising camera movements in Andrei Tarkovsky’s and Andrey Zvyagintsev’s films. We wanted that kind of camera movement and realism.”

Dani studied film and visual arts in Chapman University, Cornell University, and the UK and Spain. He occasionally conducts workshops and masterclasses for institutions such as FTII (Film and Television Institute of India), Chapman University, University of California Irvine, New York Film Academy and the UCA Film School in Spain.

For Virata Parvam, which is set in the 1990s of Telangana during the Naxal movement, Dani wanted an earthy colour palette that would be in sync with the jungle surroundings. “Earthy tones dominate the colour scheme for Ravanna (Rana) and his comrades. Vennela (Sai Pallavi) is the outsider who arrives with bright colours. The scene in which she emerges from the tent, wearing camouflage clothing similar to theirs, indicates her transformation. It is a powerful moment.” 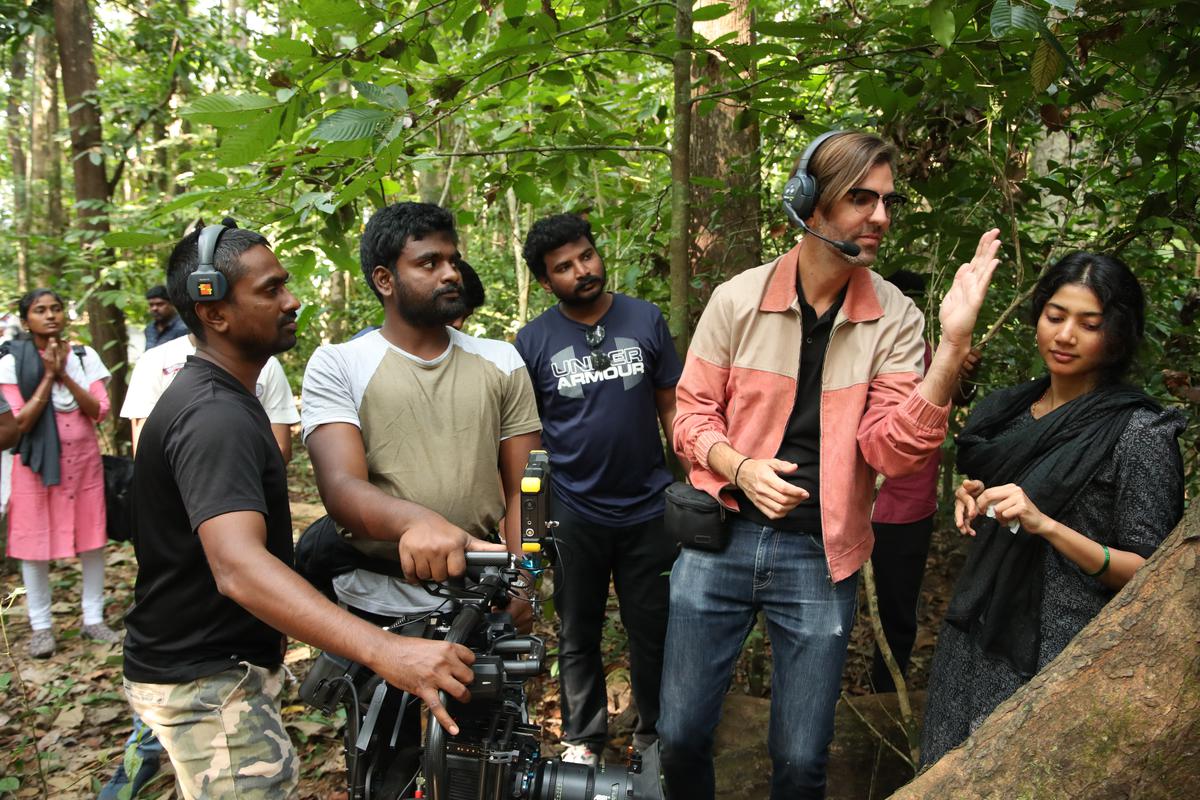 Dani checking the sunlight on Sai Pallavi, accompanied by his assistant Nishant Katari and the gimbal operator Sunil Kattula, in the jungles of Kerala
| Photo Credit: Sridhar Chadalawada

Dani’s team used gimbals to capture Vennela’s movement, as she restlessly sets out on an adventure. Dani draws an analogy to explain how he looks at the techniques employed in cinematography: “If a dolly (shot) is like God, a handheld shot is like the person you can sense near you; the gimbal works like a ghost by narrating the story without bringing too much attention to the camera. The gimbal movements let the audience follow the character.”

The technique he has used for Virata Parvam is vastly different from what he employed for Mahanati: “I do not have a signature style. I try to adapt like a chameleon and do what is required for a film.”

Virata Parvam was initially filmed by cinematographer Divakar Mani and owing to date and scheduling issues, Dani stepped in. Going through the footage filmed by Divakar, Dani wanted to ensure synergy. “The colour grading helped maintain a similar tonality in the portions filmed by Divakar and me. For some sequences during the pandemic, my second unit DoP Krunal Saadrani pitched in.”

Days before the first lockdown, Dani had flown out of India to be with his parents in Spain and was among the first international travellers to return to India in November 2020. He credits the film’s producers for helping him with all the paperwork that was necessitated by the pandemic. “We followed all precautions while filming. The truly daring people were the actors who had to perform without masks. The Bonalu sequence was filmed once the lockdown restrictions eased.”

Virata Parvam was filmed in widescreen format (1.85:1 aspect ratio) to recreate the look of the 1990s.

During the making of the film, Dani and Venu Udugala exchanged notes with editor Sreekar Prasad on how they wanted the film to look. Dani reckons that his learning of editing comes in handy in such situations: “It helps me to communicate my idea of visual design. We had a collaborative method of work.” 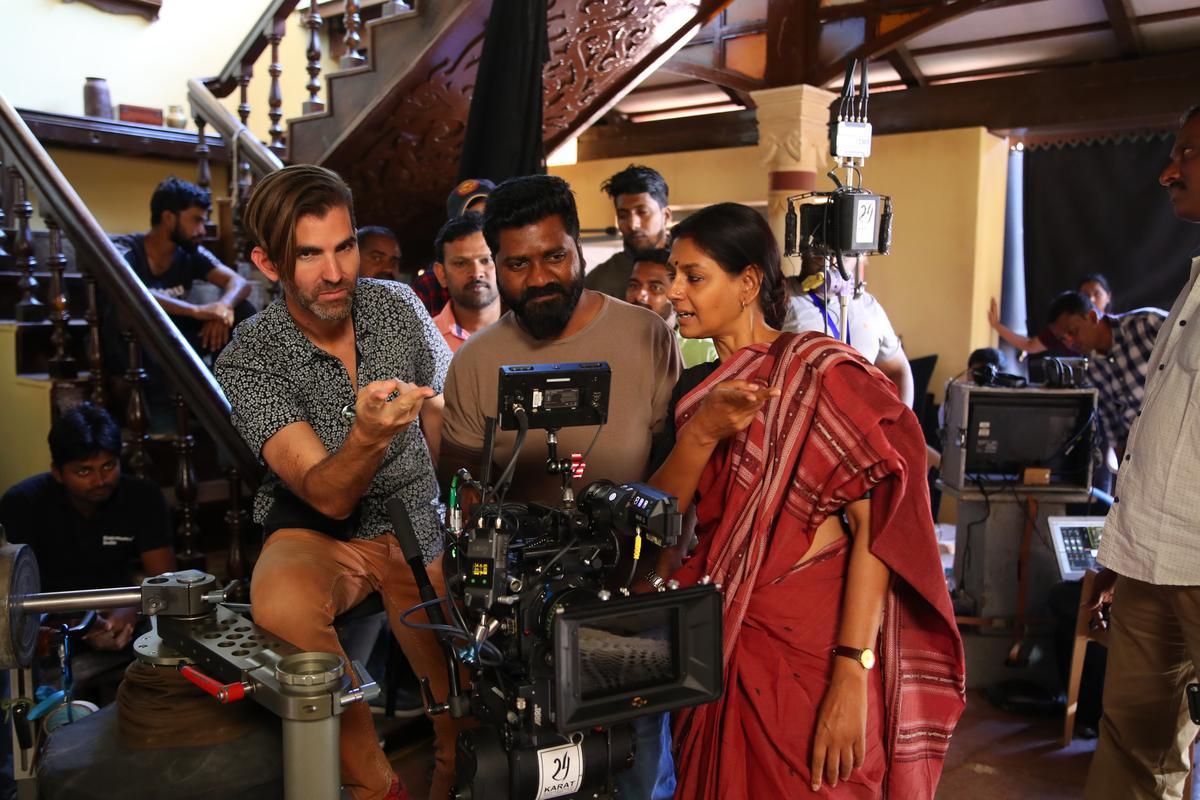 Dani wanted the visuals to align with the poetic approach while narrating Vennela’s story: “Our task was to enhance the beauty of the real world. Production designer Nagendra, for instance, used trees, branches, logs and everything available in Nature to add an artistic touch to the surroundings.”

The climax sequence is among Dani’s favourites in the film: “Vennela is tied to an uprooted tree. I thought it was metaphorical and signified that she is being uprooted from the Naxal movement.” He and the crew cross three gorges to arrive near the desired waterbody for the final sequence. “We could have filmed in a studio and worked with computer graphics. But taking the actors to the spot gets them in the right frame of mind and that, I think, contributed to the scene.”

Currently dividing his time between India and Spain, Dani is eager to try different genres. Having watched a few films across languages in India, he lavishes praise on Malayalam cinema: “They are among the best in terms of quality. Jallikattu, for example, is a high-concept film that reminded me of Spanish movies of the 1970s. I also liked Liar’s Dice.”