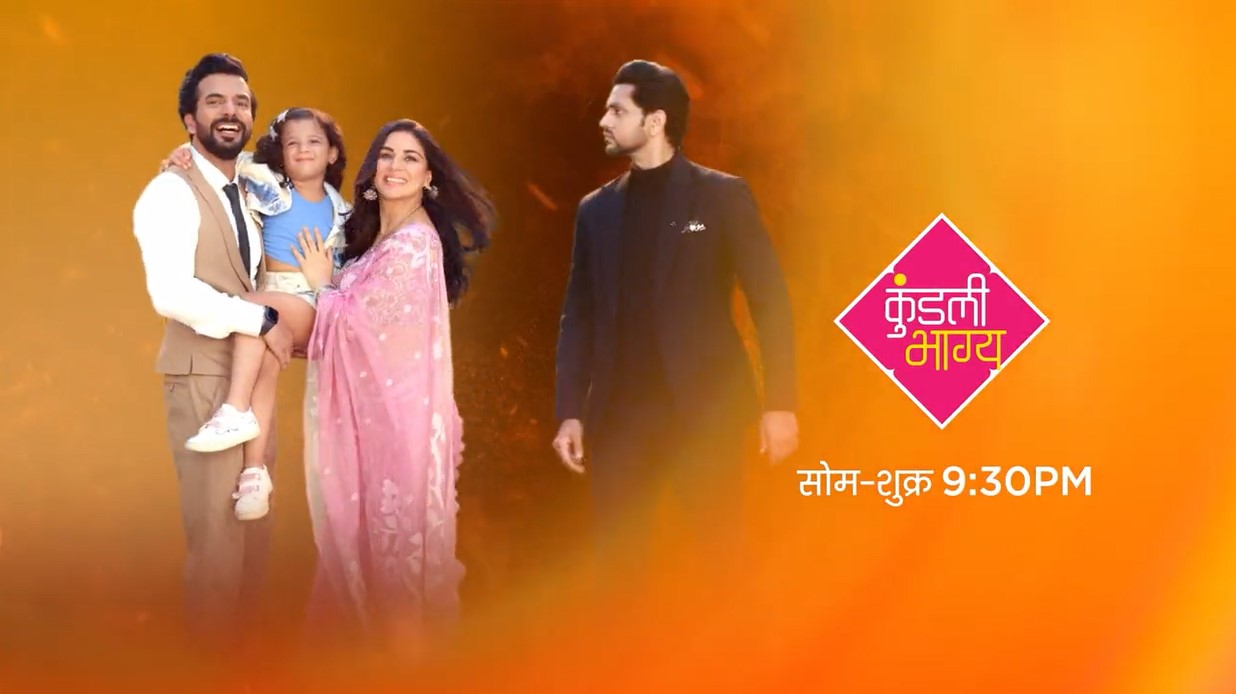 Shristhi asks the Dj to start when she signals him, Dadi walking with Arjun explains he is really enjoying being with her, Bi jee slapping him asks if he forgot her when Arjun explains how can he forget her as she would surely be his first girlfriend. Bani Dadi asks him to choose any one of them as she is really possessive when it comes to her relationships. Arjun questions what have then forced him to do, Bi jee allows him to chose Bani Dadi as she is not bothered however he should never forget her at any cost. Arjun seeing Anjali entering through the door starts walking, Arjun takes the excuse however he hits Preeta while walking, they both stop and keep having the strange feeling which they used to get, Arjun wonders what is this as he is still able to recall the same feeling, she also thinks how did she feel as if karan was around her. Rishab notices them both standing so goes to stand beside Preeta, Anjali after ending the call also comes to stand Arjun with a smile.

Shristhi tries to call them from behind but then rushes away, Shristhi asks if she can get their attention mentioning now the special moment of the party is about to come, as the anniversary couple would start their dance. Shristhi exclaims the only reason is because they have been married for five years so need to dance. Arjun gets really annoyed when both Preeta and Rishab leave for the dance floor.

Rishab and Preeta start their dance, they both are enjoying it a lot and Preeta is smiling which even the family feels delighted to witness, however Arjun starts feeling the pain. Rishab is dancing with Preeta seeing which Arjun thinks how he would also dance with Preeta like this in their past life. He is not able to bear it so leaves the party. Rishab and Preeta are still enjoying their performance a lot, they all give them a standing ovation.

Prithvi coming exclaims that from today the party is on him, he asks JJ to make the Pav Bhaji like he prefers and also a tea. He questions why is his stall called JJ while his name is Chandan. Prithvi sitting asks why is it taking him so long as he thought of celebrating this moment by eating the Pav Bhaji. The wife of his friend comes asking why is he always sitting beside Prithvi when he is not doing any work. Prithvi comes asking he was scolding because he is giving a party so he also hands a Pav Bhaji to her, she gets stunned asking what is the occasion, prithvi replies he is really happy because this is the day when he got married. She asks him to learn something from Prithvi as he cares a lot about his wife Sherlin but Prithvi says he was not talking about her, his friend mentions he also took her to their village on the anniversary, she once again starts arguing with him saying he just makes her do all the work.

Raja praises Vishnu for arranging the clothes of the waiters as now it would be really easy for them to go inside, Vishnu explains he saw the dress code so it was easy for him to arrange these clothes. The guards stop them from entering, explaining how they did not see anyone of them leaving the house, Vishnu explains if they had kept a close eye so would have surely seen them. Raja replies that he would complain to their boss if they are not allowed to enter inside, the guards therefor allow them all.

Arjun reaches the corner of the hall and is crying, Shristhi comes while talking on the phone when he quickly runs to hide in the room, Shristhi feels as if there was someone around her but Arjun manages to sit on the chair in the bedroom, he is weeping when someone wipes of the tears from his eyes, Arjun turns to see Kavya who asks why was he crying, he refuses to accept when she replies if he was in the party then would have been seen but she was playing so saw him. Arjun gets up to leave, she stopping him informs her mother also cries like him, whenever she gets hurt and even if here is an emotional scene in a movie. She also cries alone in the kitchen. Arjun asks if she ever asked the reason she cries alone or is she scolded in the house. Kavya replies whenever she cuts the onions she starts crying, she with a smile suggests he came after cutting onions. Kavya says she has a way to end the tears. She informs that her mother asked her to do it whenever anyone is ill, she explains that she would never do it for anyone but since he saved her life then she would do it, she kisses him on the forehead as he leans exclaiming, she loves him handsome. Arjun is not able to control his tears after this gesture. Kavya with a smile hug him when he also doesnot let go of her. Kavya suddenly mentions her friend is about to com so she is going to leave, she runs away picking the stuffed bear.

The women says that her destiny was ruined since her parents got her married to him, the vendor asks for his sixty rupees but she ask him to take them from prithvi but the vendor says he left a long time ago. Sherlin comes questioning what are they talking about, he requests Sherlin to talk some sense into his wife as she is always fighting with him while she even takes the name of Prithvi so politely. Sherlin agrees no one can love like Prithvi. He requests his wife to never be like Sherlin as he knows she loves him.

Preeta is in the kitchen taking out the bottle when she is stunned seeing Arjun. He asks if she lost her breath so she says that she got scared because of him. He compliments her on the amazing performance with Rishab. He says he cannot even say anything to her since Rishab already said it so she would never be bothered. He coming close to her corrects the Bindi exclaiming it was no straight. Preeta starts recalling of the time when karan came to the kitchen and then start teasing her., he blamed her for doing it purposefully so he can correct it all the time. He then burned his hand so she was forced to help him. Arjun exclaims he doesnot like the Bindi that is not straight, Preeta replies she doesnot like people who try to be over smart as he could have told her the Bindi was not straight, what does he actually want, Arjun replies he wants her, Preeta gets shocked.