Gill To Replace Shaw in all likelihood

Prithvi Shaw has two problems with his technique which get exposed in overseas conditions. He is jabbing at deliveries outside the off-stump playing too many shots often leading to his downfall. Secondly, he is leaving a big gap between the bat and pad which is causing him grief against the incoming deliveries. To add to his woes, his high backlift in pacey and bouncy conditions in Australia means that it takes time for him to get his bat down – those few fractions of a second can make all the difference between survival and a walk back to the pavilion. Shaw has scored 66 runs in 6 innings in Australia on this tour (including the two tour matches) and failed in 5 of the 6 innings. He also had a dramatic decline in form mid-way into the IPL after which he registered scores of 19, 4, 0, 0, 7, 10, 9 and 0 in his last 8 innings.

Shubman Gill, his most likely replacement at the top of the order, has not yet represented India in Test cricket but has a great first-class record. He has an aggregate of 2270 runs in just 23 matches at an average of 68.78 including 7 hundreds and 11 fifties. Gill has a better technique for the longer format, more time to play the fast bowlers and a good defense – he is classical first-class player but at the same time has all the shots in the book and can also play the dual role of an attractive and fluent stroke-player who can get quick runs with the new ball for India – something which the think-tank wanted Shaw to do at the top of the order. Gill has a strike rate of almost 74 in first-class cricket!

Rahul Should Walk in for Kohli

KL Rahul has been in majestic form in limited-overs’ cricket for the last few years. He was the highest scorer in the IPL in the UAE in 2020, has scored 1084 runs in 30 T20I innings at an average of almost 42 and strike rate of 144 since 2018 and averages close to 50 with a strike rate of 90 in ODIs in the same time-frame.

The stylish right-hander has the technique and all the shots in the book to be an international great in the future and is regarded as one of the most talented batsmen in world cricket. His Test record, though, is not very flattering with struggles overseas. Since 2018, Rahul has scored just 578 runs in 27 Test innings at an average of 22.23 with just one hundred and one fifty. His record in Australia – 187 runs in 9 innings at an average of 20.77 – is also nothing to boast about but there is a fine 110 there at the SCG registered in 2015.

But here is an important statistic. Rahul has played as an opener in 54 of the 60 innings he has batted in Test cricket and hardly been given a chance in the middle order. He has shown recently that he can play the role of the finisher in ODI cricket. If Rahul succeeds at number 4 he can be a match-winner for India in the middle order for he has the ability to do what a VVS did for India or what a Gilchrist did for Australia. Of course, Kohli’s return would mean that he is pushed down the order but the number 6 spot is still up for grabs. And who knows – maybe even number 5 after this tour!

Hanuma Vihari has done nothing wrong. He has a solid technique and a good temperament as a Test batsman and decent numbers in his exploits at the highest level. But he may have limitations with respect to what he cannot do – ie score quick runs while rotating the strike with the tail – something which India needed to do desperately in Adelaide but failed! Vihari can hold fort but can he counter-attack? Maybe not. 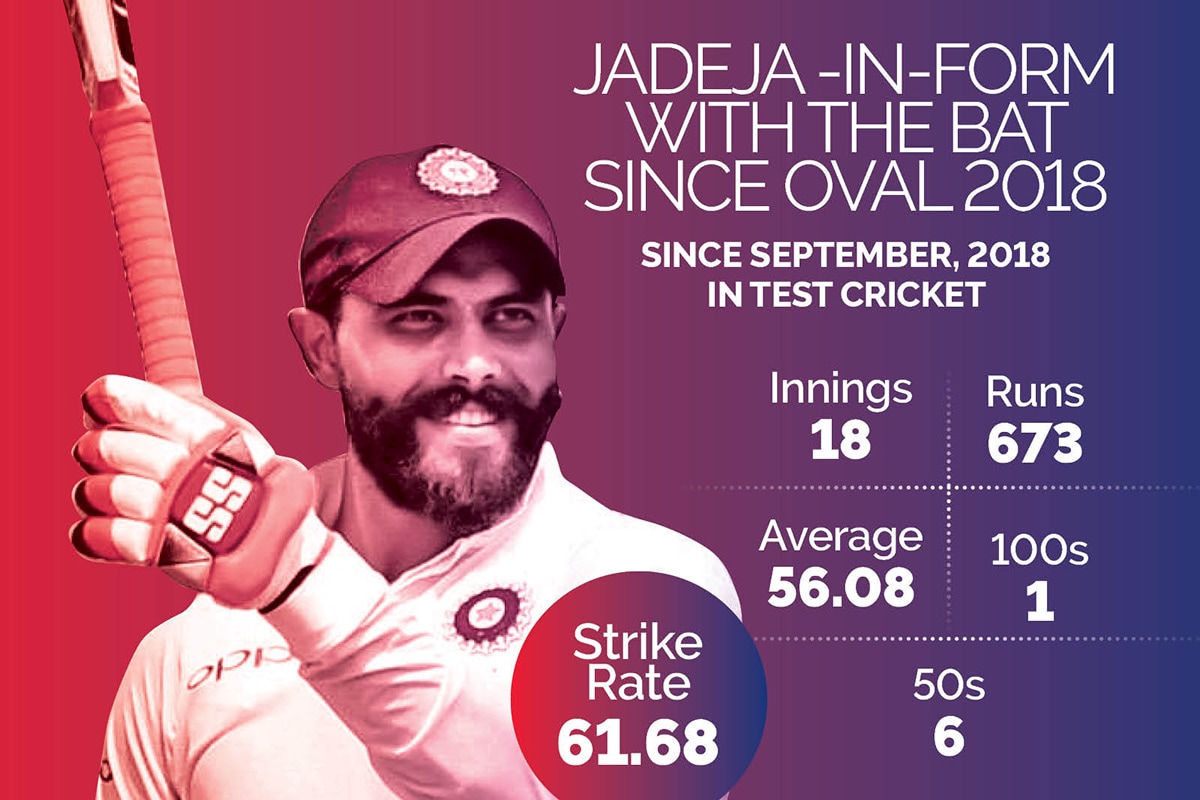 India has a pattern of going in with 6 batsmen overseas but India also has a different captain for the rest of the series. Will Ajinkya Rahane want to get in the in-form all-rounder, Ravindra Jadeja in place of Vihari at number 6. Jadeja has been in great form with the bat across formats since his unbeaten quickfire 88 against England at The Oval in September, 2018. The left-hander has scored 673 runs in 18 innings at an average of 56.08 and strike rate of 61.68 in this time-frame. His exploits include a maiden hundred against the West Indies in Rajkot and 81 against Australia in Sydney in 2019.

Jadeja recently blossomed in his new avatar as finisher for Chennai Super Kings in the IPL 2020 and ended with the third-highest strike rate in the tournament. He has produced two gems with the bat batting lower in the order for India in ODI cricket too in the recent past – Jadeja hammered 77 off just 59 deliveries almost taking India to a win against New Zealand in the 2019 World Cup semi-final in Manchester. He smashed a match-changing 66 off just 50 balls against Australia in the third ODI at Canberra.

Jadeja will also give India the extra bowling option and variety in the attack. With R Ashwin getting a lot of help and purchase from the Adelaide wicket, two spinners might be a good option at the MCG. Jadeja picked 7 wickets at The Oval and 5 at the MCG in 2018 and is always very restrictive. He is also an excellent fielder who is capable of turning the course of a match with a run-out or a stunning catch in the outfield.

Saha Out, Pant In

This is almost a certainty for MCG. While, undoubtedly Saha is a better wicket-keeper with more skills and agility behind the stumps, India need their glove-man to also score some runs with the bat. A quickfire Pant fifty in Adelaide could have changed the complexion and result of the Test. The thing is that Pant has the potential to produce that match-changing knock from number 7. Saha does not! Pant produced a scintillating hundred in the D/N tour match at the SCG before the first Test. Pant has an average of 38.76 in 13 Tests but what stands out is his strike rate of 68.57. Both his hundreds have come outside India – a brilliant 114 off 146 deliveries at The Oval in 2018 followed by an unbeaten 159 off 189 deliveries at the SCG in 2019. If Pant fires with the bat, even a quick 30 to 40 can change the course of the Test, especially in low-scoring matches in bowler friendly conditions in SENA.

Siraj in for Shami

Mohammed Shami’s absence due to a forearm injury is a huge blow for India. His strike rate of 49.9 is the best for an Indian pacer in the country’s Test cricket history (min. 150 wickets)! Shami was the second-highest wicket-taker amongst pacers with 16 wickets in 8 innings the last time India toured Australia in 2018-19 and since 2018 has picked 85 wickets in 23 Tests at 24.02 apiece at an even better strike rate of 45.4.

Mohammed Siraj might edge out Navdeep Saini as the replacement for Shami in the XI at the MCG. Siraj was in better form with the ball in the two tour matches and has a higher propensity to take wickets based on his first-class record. Siraj has picked 152 wickets in 67 innings at 23.44 apiece at a strike rate of 44.9. Saini, on the other hand, has a tally of 128 first-class wickets in 79 innings at an average of 28.46 and strike rate of 59.9.